Yesterday I read and reviewed a very powerful book about what it was like to grow up during the the days when the civil rights movement was in full swing in the southern states. The book was written by a woman whose father marched next to Martin Luther King Jr, and who played a critical role in the struggle to secure civil rights for African Americans. Here is my review: 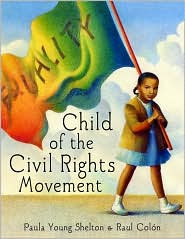 Child of the Civil Rights Movement
Paula Young
Illustrated by Raul Colon
Picture Book
Ages 6 to 8
Random House, 2010, 9780375843143
Paula was born in and she has never experienced the Jim Crow laws that her southern parents grew up with. She has not seen the ugliness of racism, and she has not been made to feel like a lesser person because of her skin color. Now her parents have decided that they need to lend their support to the civil rights movement in the south; it is time to go home.
When they get to , Paula’s father, Andrew Young, joins the battle for civil rights beside Martin Luther King Jr. To Paula he is “Uncle Martin,” and he is the kind man who plays with her in the pool and who comes to dinner. At these dinners, Paula listens to what Uncle Martin says and to the opinions of Ralph Abernathy, Randolph Blackwell, and the other men and women who are leading the effort to get justice and freedom for African Americans. Together, over the baked chicken and the creamy macaroni and cheese, this “family” decides how they should proceed with their campaigns. , sit-ins, and boycotts are all planned around the dinner table. The underlying theme is that there is to be no violence. Even if they are beaten and imprisoned, the African Americans should not respond with aggression.
This first hand account as described by Paula Young Shelton, Andrew Young’s daughter, is not only incredibly moving, but it is also very informative. Readers will get a very real sense of what it was like to be an African American child who was living in the middle of the civil rights movement. They will meet some of the key players in the movement, and will come to understand how much southern African Americans suffered under the boot of the Jim Crow laws.
Raul Colon’s distinctively evocative illustrations perfectly compliment the text.

You can purchase the book on Amazon here.
Posted by Marya Jansen-Gruber at 6:56 AM