Recently I have been spending a good bit of my free time reconnecting myself to the world of music. I played the flute when I was a child and teenager - and then I just stopped. Now I am playing the flute again, and I am teaching myself the penny whistle. Over the last few weeks I have been reminded of the fact that music can truly offer solace and give your heart a lift.

The books that I have reviewed below are not only perfect titles for black history month, but they also look at the way in which songs can tell the story of a people. The will help readers to see and appreciate that music truly does have the power to give people strength and hope during hard times. 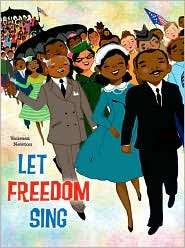 Let Freedom Sing
Vanessa Newton
Picture Book
Ages 6 and up
Blue Apple Books, 2009, 978-1-934706-90-9
During the Civil Rights movement marchers, protestors, and activists had to face all kinds of obstacles. They were ridiculed, arrested, imprisoned, beaten, and bombed. It was a hard time and often, to lift their spirits and to give them strength, the activists raised their voices in song. Sometimes the words they sang described what they were doing: sitting on a bus, sitting in a jail cell, or participating in a sit in. Sometimes their songs were about “letting the best in themselves shine the brightest.” The song “This little light of mine,” was just such a song.
In this powerful and memorable book, Vanessa Newton takes the words of “This little light of mine,” a gospel children’s song, weaving her own words around the lyrics to show her readers how people from all walks of life “let their lights shine” for the civil rights cause. She shows how the Jim Crow laws kept white and black separate, and she shows how people dared to fight those laws without resorting to violence.
Throughout the book, Vanessa Newton marries the text with her delightfully warm and rich vintage style multimedia art. The pictures capture special moments in the civil rights movement, including the day when Rosa Parks refused to move from her bus seat, and the day when Ruby Bridges dared to walk alone to attend an all-white elementary school in the South.

Freedom Song: Young Voices and the Struggle for Civil Rights
Mary C. Turck
Nonfiction (with an audio CD)
For ages 10 and up
Review Press, 2009, 978-1-55652-773-9
Many of us think that the American Civil Rights movement began in the 50’s and 60’s. In actual fact, it began many years before when slaves found ways to fight back against their oppressors. They learn to read and write in secret, they ran away to northern states and into , they refused to give up their hopes and dreams, and they sang songs. The songs they sang gave the slaves the strength to go on, they gave them hope, and they gave them the means to ‘talk’ about their dreams for the future.
Many years after these melodies were first sung in cotton fields and on plantations, these same songs, and other like them, were sung in churches where African Americans came together to talk about how they would fight against segregation. Songs filled the air as people marched to protest segregated buses, schools, bus stations, restaurants, and other public places. Sometimes old traditional spirituals were given new lyrics to suit the times.
This carefully researched book will help readers to see the role that music has had in the struggle for civil rights in American. Among other things, the author looks at the origins of the songs that were sung, the history of the movement, and she also tells the story of the Chicago Children’s Choir.
Please use the search box at the top of the page to purchase these titles on Amazon.com
Posted by Marya Jansen-Gruber at 1:53 PM