A book review: Picture the Dead

Yesterday I posted an announcement about the release of a book called Picture the Dead. Today I would like to share my review of the book with you. If you have an interest in the paranormal and/or in the American Civil War, then this is the book for you. 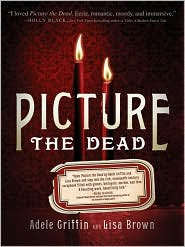 Adele Griffin
Illustrated by Lisa Brown
Fiction
Ages 14 and up
Sourcebooks, 2010, 978-1-4022-3712-6
Ever since the death of her parents, Jennie Lovell’s life has been complicated. Living with her uncle and aunt, neither of whom want her, has not been easy, but at least she has always had her brother, Toby, with whom to share her trials and worries. Now Toby is dead, a casualty of the Civil War, and Jennie lives in fear that Will, her cousin and her fiancé, might also be killed.
One night Jennie is woken up by the arrival of a carriage. Jennie hopes the passenger is Will, but instead it is Will’s brother Quinn, who is grievously ill and wounded. One look from Quinn and Jennie knows that Will is dead. Quinn tells everyone that Will died honorably on the battlefield, and for a time Jennie accepts this. Then strange things start to happen and she begins to wonder if Quinn is telling the truth.
Jennie, Quinn, and Quinn’s parents have their photograph taken by a photographer who specializes in photos that are supposed to help connect the living with their dead loved ones. When she sees the photo that the photographer took, Jennie knows at once that the so-called angel in the photo is a hoax. However, the wreath of black irises that appears on the photo some time later is not a hoax at all. It is a message from Will, and Jennie has to figure out what he is trying to tell her. What she discovers turns out to be more terrible than she could ever have imagined.
This extremely powerful and sometimes disturbing book will very likely cause readers to experience a spooky shiver more than once as they read. The author beautifully captures the sadness and fear that filled the hearts of family members and sweethearts as they waited for their loved ones to come home from the American Civil War. All too often, all they got in response to their prayers was a letter on condolence and perhaps, if they were lucky, a few of their loved one’s personal effects. Beautifully merging fact and fiction, Adele Griffin and Lisa Brown give their readers a haunting story that is likely to stay with them for a long time.
Posted by Marya Jansen-Gruber at 2:34 PM