A few years ago I got my daughter her first American Girl doll. She chose Samantha, a doll whose stories take place in the Edwardian era. We collected the books that go with the doll, which I read to her, and had a blast finding outfits and accessories that suited Samantha's time. I was able to use the doll to teach my daughter about what it would have been like to live in America at the turn of the century. We talked about women's rights, the treatment of working class people, and the class system that existed then.


A few years after we got Samantha, someone gave my daughter their Molly doll and I was able to share the history of the WWII years with her through Molly's stories.


This year American Girl is launching a new doll. Her name is Kanani, and her stories will focus on the need to care for others. Here is the press release about this new doll, her books, and America Girl's partnership with  the National Wildlife Federation.

ALOHA, KANANI! AMERICAN GIRL’S 2011 GIRL OF THE YEAR HAILS FROM HAWAI‘I!
—National Campaign Encourages Girls to Share the Aloha Spirit of Helping Others— 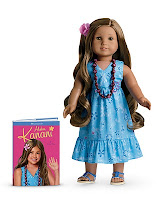 This January, kicking off American Girl’s 25th birthday celebration, is the debut of Kanani Akina, the 2011 Girl of the Year®, whose story takes place in the lush tropical paradise of Hawai‘i. A warm and cheerful girl, Kanani loves her town’s beautiful beaches, tropical sunsets, and fun lu‘aus, but most of all, she and her family love sharing the aloha spirit—a desire to welcome and care for others with an open heart. Through Kanani, girls will discover that everyone has something to share that can make life better for someone else.
Kanani is available for one year and will launch with two books that tell her story, a beautiful 18-inch Kanani doll (featuring long, wavy medium-brown hair and hazel eyes), and an array of outfits and accessories such as a paddleboard set, a plush Hawaiian monk seal, and a shave ice stand!


Written by acclaimed author Lisa Yee, the 2011 Girl of the Year books—Aloha, Kanani and Good Job, Kanani—introduce readers to Kanani and her small seaside town on the island of Kaua‘i. Kanani loves working in her family’s shave ice and sweet treats store, as well as sharing the wonders of Hawai‘i with visitors. Whether she’s making her cousin from feel welcome on the island, helping rescue a baby Hawaiian monk seal, or assisting older people in her community, Kanani learns that by sharing herself and her home in the true aloha spirit, she is able to make life better for others. The back of each Kanani book features profiles of real girls who, like Kanani, discover the joy of helping others through their gifts and efforts, however small.
To share in the Hawaiian spirit of helping others, American Girl is partnering with the National Wildlife Federation (NWF) to help raise awareness of endangered animals, like the Hawaiian monk seal featured in Kanani’s stories. With the purchase of every Kanani plush monk seal sold in 2011, American Girl is donating $1 (up to a maximum of $100,000) to NWF’s efforts to help children throughout the United States gain an appreciation and understanding for America’s most vulnerable animals through various educational programs and activities.


To further engage girls in Kanani’s world and her story’s inspirational message, American Girl is introducing the following products and activities in 2011:
«      Lend a Hand: Girl-Sized Ways of Helping Others: A nonfiction companion advice book to the Kanani fiction series, Lend a Hand gives girls ideas and tips (both big and small) for making a difference at home, among their friends, in their community, and on the planet.
«      Kanani Retail Events: Starting on January 1, girls can take part in Kanani-inspired events at American Girl retail stores nationwide, including demonstrations for dancing hula, free Hawaiian craft activities, and delicious Kanani-themed meals.
«      Kanani and Me E-cards: From January 1 through April 15, 2011, girls can create and share their own Kanani-themed postcards at americangirl.com/girloftheyear and can be automatically entered (with parent’s permission) in a drawing to win a Kanani doll and book.
Starting on January 1, 2011, the Kanani doll, books, and accessories will be available for one year or while supplies last through American Girl’s catalogue, at americangirl.com, and at all American Girl retail locations. To request a free American Girl catalogue, call 1-800-845-0005.
About American Girl
American Girl Brands, LLC, is a wholly owned subsidiary of Mattel, Inc. (NASDAQ:MAT, www.mattel.com), the world’s leading toy company. Since American Girl’s inception in 1986, the company has devoted its entire business to celebrating the potential of girls ages 3 to 12. American Girl encourages girls to dream, to grow, to aspire, to create, and to imagine through a wide range of engaging and insightful books, age-appropriate and educational products, and unforgettable experiences. In meeting its mission with a vigilant eye toward quality and service, American Girl has earned the loyal following of millions of girls and the praise and trust of parents and educators. To learn more about American Girl or to request a free catalogue, call
1-800-845-0005 or visit www.americangirl.com.
About National Wildlife Federation
National Wildlife Federation is the nation's largest conservation organization and publisher of the award-winning children’s magazines Ranger Rick®, Your Big Backyard®, and Wild Animal Baby®. National Wildlife Federation inspires more than four million members and supporters to protect wildlife for our children’s future. For more information, visit www.nwf.org.
Posted by Marya Jansen-Gruber at 2:55 PM