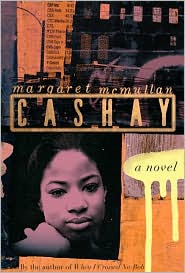 I recently read a book that I was not, I have to admit, keen on reading. I read the blurb, and the subject matter sounded so grim that I kept picking it up - and putting it down. Yes, I was a coward. I didn't want to read a book about something that sounded painful.


Finally, thanks to the gently cajoling of a good friend, I began to read. I read the whole book in one sitting and turned off the light very late that night. It was a fabulous book and I know that I will always remember it. Here is my review:

Cashay
Margaret McMullan
Fiction
Ages 12 and up
Houghton Mifflin, 2009, 978-0-547-07656-0
Cashay lives in the projects with her mother and her sister Sashay. There are many things about her life that Cashay wishes she could change, but there is one thing that she loves and treasures – her sister. Cashay’s mother took drugs when she was pregnant with Sashay, and because of this Sashay is a little behind in school, but she is a sweet, sunshiny girl who makes Cashay laugh.
Together Cashay and Sashay cope with their often very difficult life. Then the unthinkable happens, Sashay is killed by a drug pusher’s bullet. For Cashay it is as if the light has gone out of her life. Her mother gets herself a new boyfriend and sinks herself into the oblivion of dugs, and Cashay is alone with her grief and her rage.
Realizing that Cashay is in trouble, the school counselor decides to send her to an afterschool program that is run by some nuns. At first the experiment is a dismal failure as far as Cashay is concerned. Then she is set up with a mentor, a single white woman who is a stockbroker and who helps Cashay to see that the world is a big place full of possibilities.
This often painful and very powerful story beautifully captures what life is like for children who live in poverty in inner cities. They are surrounded by ugliness, despair, and violence. They don’t know what it is like to ride in a cab, to go to a museum, or to eat in a nice restaurant. They also live with the fear that at any minute someone could shoot them or someone they love. Margaret McMullen gives Cashay such a compelling voice, that readers will find this young girl irresistible. With poignant realism and memorable characters, Margaret McMullen gives her readers an honest message of hope.
Later this week I will be interviewing the author, Margart McMullen. By the by, I have asked the publisher for Margaret's other YA titles. Never again will I "pass" on a book by this talented lady. Thank you Susan for getting me to read it.
Posted by Marya Jansen-Gruber at 2:27 AM