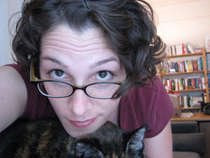 1. Over the years, you have written many books for young children. What prompted you to write a novel for older readers?
I had always wanted to write novels -- fantasy novels in particular. I think it just took me a long time to feel ready. All of my professional experience was with younger and shorter books, and a novel seemed like such a huge undertaking. (And it was!) I had a few ideas for novels written down in notebooks, but it wasn't until I got the first glimmer of the idea for The Dragon of Trelian that I actually attempted to turn one of my novel ideas into a book.

2. Where did the inspiration for this book come from?
It's always hard for me to say where the initial inspiration for any book comes from. I think for this story, it started with an image: a boy and a girl at a window in a castle. I started thinking more and more about who they might be and why they were there, and eventually I started to imagine the characters of Meg and Calen and some of what would be happening in the plot. I also knew I would want to include some of my favorite fantasy elements, like dragons and castles and magic and romance and adventure, and so all of that ended up being worked in as I developed the story and characters.

3. Did you draw on myths and legends about dragons to create the dragon in this book?
I've loved dragons for about as long as I've been reading fantasy (which is almost as long as I've been able to read). I definitely have a lot of impressions about dragons based on all the old and new books and stories I've read over the years, including everything from fairy tales and folklore to modern fantasy novels to Dungeons & Dragons role-playing games. Dragons are presented in countless ways across different sources, and for my dragon I used what made the most sense to me for this story. I knew I wanted him to be a bit mysterious and alien -- I didn't want him to be able to speak in human languages like some dragons can, or for him to be too easy for Meg and Calen to understand or communicate with directly. He's a wild, magical creature, with a mind and way of experiencing the world that is very different from the way humans think and experience things.

4. From your website, I saw that you work on several projects at once. How does that work?
I don't really have one clear system. I worked on The Dragon of Trelian for a long time, on and off -- about seven and a half years from start to finish (that is, from the day I sat down to write the first line to the day the finished book came out in stores). In between I worked on lots of other projects. Sometimes I set the novel aside for months at a time, either because I wanted to focus on other things for a while or because I needed some time to figure out parts of the story that weren't coming together yet. Today I always seem to be working on a bunch of different projects at once. Some days I might work on a novel for a few hours and then switch to working on a picture book, some days I might only work on one thing, some days I might not do any writing at all. Different projects are also often in various stages. So I might be working on a first draft of a new picture book around the same time I'm in the middle of a first draft of a novel and working on revisions of another book or looking over copyedits for something else. It depends what else I have in the works and what stage each project is at. I also enjoy working on more than one first draft at a time and bouncing back and forth between different stories. Especially since a lot of my first drafts are exploratory drafts, and won't necessarily end up as successful manuscripts. I can worry less about whether each individual idea is going to pan out when I know I've got other ideas going at the same time. Also, sometimes it just really helps me to put one thing aside to work on another for a while.

5. How long does it take you to write a picture book?
Sometimes I can write a first draft very quickly -- maybe even in just one day (or night). Other times I might only have the first few lines, and need to come back to that beginning several times before figuring out how to go on. Other times I might finish a first draft in a few days but then need to do lots and lots of revision. I have some picture book manuscripts I have worked on for years, on and off, before figuring out the best way to tell the story.

6. Do you have any plans to write a sequel to The Dragon of Trelian?
Yes! I'm working on it right now, in fact.

7. The connection between Meg and the orphaned dragon she finds is a powerful one. Where did the idea for this come from?
This is another difficult thing to really pin down. I knew I wanted Meg to have a relationship with a dragon, but I don't think I actually planned at first what exactly that relationship would be like. I figure out a lot of the story during the actual writing of the first draft, and so a lot of the time what happens is as surprising to me as it is to my characters! When I was little, I used to desperately want to be able to communicate with animals. Especially cats. I used to try to talk to cats all the time, wishing they would talk back. I suspect part of that desire showed up in Meg's link with Jakl. Although they can't actually talk to each other in words, they share feelings and energy and sensations, and I had a lot of fun trying to imagine what that might be like.

8. Do you work on your picture book stories in your head before you start to write, or do you make notes on paper?
Both. Sometimes I get an idea and jot notes down on whatever is handy so I won't forget. The first draft of my picture book Library Lion, for example, was written on pieces of purple note paper, some post-it notes, and the back of an envelope. Other times I will carry a story idea in my head for a little while before writing anything down. If the idea seems too fragile and I'm not sure enough yet about what it will be, I might wait to write it down for fear of forcing it into tangible form before it's ready. And other times I will just start writing with no real idea of what a story is about, just to see what might happen.

9. What do you like to do when you are not writing or editing?
I love to read (of course!) and I also spend way too much time on the computer, writing email and chatting with friends and playing Scrabble on Facebook. :) When I do actually manage to pull myself away from my computer, I love going to the movies, hanging out with friends in real life instead of online, and going for walks around my neighborhood or other places in Brooklyn or Manhattan. I used to act and sing in community theater, but I haven't had as much time as I'd like for that in recent years. I'm hoping to get involved in a show again in the near future, though, if I possibly can. It's a lot of fun to be working on a production with a bunch of other people, and it's a nice counterpoint to writing, which involves a lot of sitting alone at your desk!

10. Do you have any big projects on the horizon that you are excited about?
I'm very excited about my next picture book, which is being published by Candlewick Press in spring 2011. It's called ARGUS and is being illustrated by the wonderful Andréa Wesson. I've also got some other picture books in the works, and am hard at work on the sequel to The Dragon of Trelian and another (unrelated) novel, which is a fantasy for YA readers.

Many thanks Michelle. You can find out more about Michelle on her website and on her blog.
Posted by Marya Jansen-Gruber at 5:26 AM

Great interview. I'm glad to know about the second book. Should be fun.