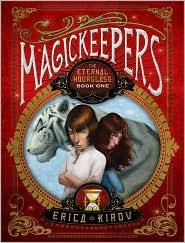 I recently read and reviewed Magickeepers: The Eternal Houseglass. This is the first book in a new series, and I found it both highly entertaining and very engaging. In fact, I was more than a little sorry when the story came to an end. Here is my review:

Magickeepers: The Eternal Houseglass – Book One
Erica Kirov
Fiction (Series)
Ages 8 to 12
Sourcebooks, 2009, 1-4022-1501-0
Nick loves his father but he wishes that he wasn’t such a bad magician. Ever since the death of his wife, Nick’ father has moved from job to job around Las Vegas. His performances, and jokes, often fall flat, and he is not popular. Then, on his birthday, Nick finds out that he is not just the son of a washed up magician. He finds out that he can see the past in crystal balls, and his grandfather tells him that he, Nick Rostov, is descended from a long line of powerful magicians. Nick does really believe his grandfather’s words until he gets a surprise visitor. The magician Damian, whose elaborate shows are the talk of the town, walks out of Nick’s bedroom closet and he magically whisks the boy away to the Winter Palace Hotel and Casino.
In a luxurious penthouse apartment Nick finds out that he really is a member of a family of magicians. Damian is his cousin, and the amazing tricks he performs are not illusions at all. When Damian makes a white tiger disappear he really does it.
This news is more than enough for Nick, but there is more. He finds out that he is a Magickeeper, and that there is a rival group of magicians called Shadowkeepers who are extremely dangerous. The Magickeepers and the Shadowkeepers have been fighting one another for centuries. Both groups seek magical artifacts of great power, and now the Shadowseekers are looking for Nick, whom they think will be able to lead them to an artifact that has been lost for many years.
In this delightful first book in a new series, Erica Kirov beautifully combines fantasy with history. Colorful characters, numerous surprises, and a plenty of action will keep readers engaged all the way through the book. Let us hope that the second book will be in the bookshops soon so that we can find out what happens next in the near future.
You can find out more about Erica and her books on her website and her blog.
Posted by Marya Jansen-Gruber at 8:27 AM