The Stanley the dog books

For the June issue of Through the Looking Glass I reviewed the Stanley the dog books by Linda Bailey and Bill Slavin. As a dog lover, I think the books perfectly portray doggy behavior. One of my dogs frequently looks at me with an expression that clearly says "what are you doing and why are you doing it? You are a very strange animal." The Stanley books capture the confusion that dogs must surely feel about the odd things we humans do. They love us, but they certainly do not understand what we are about. The stories also remind us that simple things are often very precious. We should remember to enjoy good smells, snacks, friends, and the people we love best. Here are my reviews of the books: 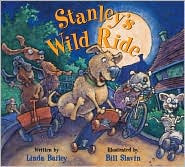 Stanley’s Wild Ride
Linda Bailey
Illustrated by Bill Slavin
Picture Book (Series)
Ages 3 to 7
Kids Can Press, 2006, 1-55337-960-8
Stanley the dog has a very boring existence, and he is heartily fed up with having to look at the same old things repeatedly as he lies inside the fence day after day. One night though, Stanley discovers that there is a little hole under the fence, and in pretty short order he makes the hole just big enough to accommodate a dog. Soon Stanley is out on the loose and having the time of his life. His best friends Alice, Nutsy, Elwood, and Gassy Jack also manage to break out of their respective yards and homes, and the five dogs have a wonderful time running up and down streets, sniffing whatever they like and doing all those things that dogs like to do.
Then, at the top of a hill, Stanley discovers a skateboard, and from that moment on, the dog’s night of revelry turns into something quite out of the ordinary.
This deliciously funny picture book will give dog lovers of all ages a wonderful laugh. Highly textured acrylic artwork captures the excitement of the night and the sheer feeling of joie de vivre that the dogs experience as they enjoy their elicit freedom.
Stanley at Sea 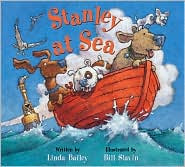 Linda Bailey
Illustrated by Bill Slavin
Picture Book (Series)
Ages 4 to 8
Kids Can Press, 2008, 1554531934
Stanley the dog knows that he is not supposed to beg but he just can’t help himself. His people are having a fantastic picnic feast, and they aren’t giving him anything to nibble on. Eventually Stanley is told to “Get!” and so he goes down to the river where his friends are hanging out. All the dogs are hungry, so they are delighted when they find a trash can full of delicacies . Then, out of the blue a big truck arrives and it empties the trash can. Alas for Stanley and his friends, their feast is gone.
Next, the hungry dogs chase another food trail to ground, and this time the food is in a little boat. In seconds, Gassy Jack eats the leftover sandwich that they find in the boat. It is only when they turn around to get out of the boat that the dogs realize that the boat they are in is afloat.
In no time at all Stanley and his chums are swept out to sea in their little boat. Where are they going to end up?
In this delightful Stanley title, Linda Bailey and Bill Slavin once again collaborate to give their readers a deliciously funny picture book. Presented from the point of view of the dogs, the story is perfectly paced, and readers will find it hard not to chuckle when they see where the dogs end up. 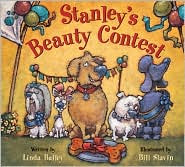 Stanley’s Beauty Contest
Linda Bailey
Illustrated by Bill Slavin
Picture Book (Series)
Ages 4 to 8
Kids Can Press, 2009, 978-1-55453-318-3
Stanley’s day is not going well. He hasn’t been fed his breakfast, and his people have given him a bath, which Stanley - being the sensible dog that he is - hates. Who wants to be washed and dried? Who wants be smell sweet? Not Stanley.
After the bath is all over, Stanley’s people take him to the park where Stanley is going to participate in a dog contest. Stanley and his friends think the whole thing is very strange, until they smell the prizes – three delectable hot-from-the-oven dog biscuits. Will Stanley be able to run the fastest, or do the best trick, or be the most beautiful so that he can have one of the dog biscuits?
Written from the point of view of Stanley and his friends, this wonderfully funny picture book perfectly captures doggy joys and woes. Not only will children have a good laugh when they see what Stanley gets up to, but they will also be reminded of the fact that sometimes the best things in life are the simple things that we tend to take for granted.
Stanley’s Party 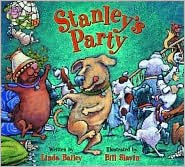 Linda Bailey
Illustrated by Bill Slavin
Picture Book (Series)
Ages 4 to 8
Kids Can Press, 2003, 1553373820
One night Stanley decides to try lying on the couch. Of course, he knows that he is not supposed to do this, but his people are away and they won’t be back until midnight. What’s the harm? So Stanley gets up on the couch and enjoys its comforts, making sure that he leaves everything neat and tidy before his people get home.
Next Stanley tries listening to some music, which he knows is what his people do when they sit on the couch. He then gets himself a snack from the fridge. This is the life! As long as he is careful, he can have a wonderful time while his people are away.
Eventually the day comes when Stanley starts to feel that there is something missing from his life of comfort. He needs some company.
In this hilarious Stanley story, we get to meet a very doggy dog who knows what he wants. Told from Stanley’s point of view, the story will have readers in giggles in no time. Do you know what your dog does when you are not home?
Thank you Linda and Bill for these delightful books.
Posted by Marya Jansen-Gruber at 9:23 AM