Bookish Calendar: On this day in 1955, Rosa Parks took a stand (or rather a seat!)

On this day in 1955, Rosa Parks decided that enough was enough. When she was asked to give up her seat on a Montgomery bus so that a white person might sit down, she refused. For this crime she was imprisoned, and because of what happened on that bus, the leaders of the Montgomery civil rights movement decided to stage a bus boycott, which lasted for more than a year.

I recently read a wonderful picture book about the bus that Rosa rode on that fateful day, and about the pivotal role that it played in the civil rights movement. Here is my review.

Jo S. Kittinger
Illustrated by Steven Walker
Nonfiction picture book
Ages 6 to 8
Boyds Mills Press, 2010, 978-1-59078-722-9
Bus #2857 rolled off the General Motors assembly line in 1948. It carried people around Terra Haute, Indiana for a few years, and then it was taken south to Montgomery in Alabama in 1954. In this city, the bus acquired something new. A sign was put in place ten seats back from the front of the bus. The new sign read: Colored, and it meant that African American passengers could only sit at the back of the bus.
If you were white you got onto the bus, paid your dime, and sat in one of the front seats. If you were African American, you got on the bus, paid your dime, got off, and got back on using the rear door of the bus so that you could sit in one of the rear seats. It did not matter if you were old and frail or if it was raining and cold. If you were “colored” this is what you had to do. If the white seats filled up, a whole row of African American passengers had to give up their seats because African Americans could not share a row with white people. “That’s just the way things were.”
Then, on the evening of December 1, 1955, Mrs. Rosa Parks got onto bus #2857 and she took a seat behind the Colored sign. At the next stop, all the seats for the white folks filled up, and the bus driver told Rosa and the other passengers in her row to get up so that a white man could sit down. The other African American passengers did as they were told, but Rosa refused to do so. She was arrested, and soon afterwards the Montgomery bus boycott began. 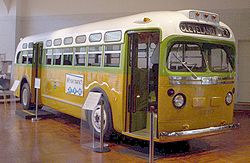 The story of Rosa Parks’ actions on that famous day in 1955 has been told many times, but never in this way. The author tells the story from the point of view of the bus that carried Rosa Parks on that winter’s day. Readers will learn that Rosa’s bus did not end up on a scrap heap. Instead, it was saved so that future generations could see the bus that witnessed an event that helped to shape ’s history.
Throughout this book, warm illustrations compliment the lyrical text. At the back of the book the author provides her readers with further information about bus #2857, about the events that led up to Rosa Parks’ brave stand, and about what happened after Rosa was arrested.
You can read about more Rosa Parks books on the TTLG Rosa Parks feature page.

Posted by Marya Jansen-Gruber at 7:52 AM