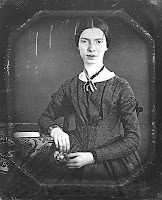 On this day in 1830 Emily Dickinson was born in Amherst, Massachusetts. Emily would grow up to become a reclusive lady who rarely left the home where she was born and where she grew up. In her room Emily wrote poetry that was often dark, and that was very unique. Though she refused to share much of her poetry with the world during her lifetime, she did save the poems she wrote, which her sister had published after Emily's death.

For today's Poetry Friday I have a book for you that contains seven of Emily Dickinson's most famous poems. If you interested in this very unique woman, you might want to take a look at the TTLG Emily Dickinson feature page as well. Here you will find reviews of three titles, all of which look at Emily Dickinson's life in interesting ways.

My letter to the world and other poems

Emily Dickinson
Illustrated by Isabelle Arsenault
Poetry
Kids Can Press, 2008, 978-1-55453-103-5
Many readers find Emily Dickinson’s poems a challenge to read. Her tendency to choose dark subjects, and her unconventional use of language and punctuation make her poems demanding. One has to think and ponder her words to find their meaning, but the poems are more than worth the effort. In this beautiful book, readers will find seven of Emily Dickinson’s most famous poems.
In one of the poems Emily gives us a picture of hope, which “is the thing with feathers - / That perches in the soul - / And sings the tune without the words - / And never stops – at all.” In another, she takes a ride in a carriage with Death and sees the world in a new way. In yet another poem Emily Dickinson says “I’m nobody! Who are you?” We, her readers, are invited to be nobodies too. Is this an invitation that we would accept if we could?
Throughout this book, Isabelle Arsenault’s haunting multimedia illustrations provide the perfect backdrop for Emily Dickinson’s poems.
Posted by Marya Jansen-Gruber at 7:38 AM