Canadian Children's Book Publisher is given the Order of Canada

Aldana founded Groundwood Books in 1978 in response to the perceived lack of a children’s literary tradition in Canada. Incorporated into House of Anansi Press in 2005, Groundwood is committed to publishing books that feature representations of marginalized voices and experiences that are not often heard. Groundwood Books has won seventeen Governor General’s Literary Awards to date.

Internationally, Aldana has just completed a term as the President of the International Board on Books for Young People (IBBY). Founded on the belief that books can build bridges of understanding and peace between people, the organization is now comprised of seventy-two National Sections worldwide. Its newest members are the United Arab Emirates and Kuwait.

Aldana has most recently been named the 2011 recipient of the Ontario Library Association Les Fowlie Intellectual Freedom Award.

An op-ed from the January 3, 2011 edition of the Globe and Mail, which outlines Aldana’s beliefs on the importance of reading, is excerpted below: 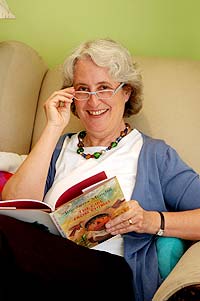 Adults sometimes forget what reading means to children. Patsy Aldana of Toronto, publisher of Groundwood Books, who was named a member of the Order of Canada last week, has made children’s reading her life’s work. Reading is healing, she says. Reading is a window into oneself and others. Reading is a bulwark of democracy. And we don’t do enough, she says, to nurture our children’s love of reading.


Each child, Ms. Aldana says, should have access to books that are right for him or her. She is distressed that, in Ontario surveys, children and teenagers report that they are getting less pleasure from books than they used to. She blames that on an education system that in her view puts too much emphasis on literacy as a skill for future workers, and not enough emphasis on reading pleasure. Reading “talks to you about who you are, or it tells you something about who the other is. So they’re windows and mirrors.” And it’s essential to becoming a free person in a democratic society. “If you become a reader, you have a chance to become a critical thinker, to be a person who has some power over your life.”


Children’s love of reading is inherent and therefore timeless and universal. Adults can’t kill it, but they should heed Ms. Aldana’s message and do more to nurture it.

The Order of Canada is one of Canda's highest civilian honours. It was established in 1967, during Canada’s centennial year, to recognize a lifetime of outstanding achievement, dedication to community and service to the nation. Over the last forty years, more than five thousand people from all sectors of society have been invested into the Order.
Posted by Marya Jansen-Gruber at 3:57 PM

The only time rewriting articles becomes a violation of copyright infringement is if the person has copied the article verbatim.visit site