Stella and Sam are now on the television 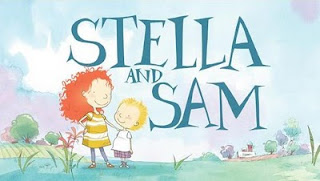 A few years ago I started to review the Stella and Sam books, which are written and illustrated by Marie-Louise Gay. The series is one of my favorites, and I was delighted to hear that Stella and Sam now have their own television show. Here is some information about the show:

Astral’s Playhouse Disney premiered the new animated series Stella and Sam on Sunday, January 9 at 10:30 a.m. ET. The new series, based on the internationally best-selling Groundwood books by Canadian author and illustrator Marie-Louise Gay, follows the backyard adventures of four-year-old Sam and his older sister Stella.Gay has written and illustrated eight books in the Stella and Sam series to date. They have been translated into fifteen languages and sold more than one million copies worldwide.

Children can now venture further into the world of Stella and Sam with interactive adventures designed for children and their families to explore online at www.playhousedisney.ca. Families can learn more about show's characters, play Stella and Sam games and download printable activities.

Groundwood will be publishing new paperback editions of Good Morning, Sam and Good Night, Sam in February 2011, followed by When Stella Was Very, Very Small and What Are You Doing, Sam? in the same format this August. All books can be purchased from booksellers nationwide or the Groundwood Books website.

Here is a little video about the series, with an interview with Marie-Louise Gay

Posted by Marya Jansen-Gruber at 12:05 PM