, on which the movie Babe was based. He was awarded an Honorary Master of Education degree by the University of the West of England in 1999 and appointed Officer of the Order of the British Empire (OBE) in the 2010 New Year Honours. 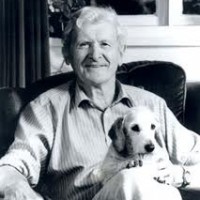 King-Smith was a soldier in World War II and a farmer for 20 years before he became a teacher and author. King-Smith's first book was The Fox Busters, published in 1978. He was one of 's most prolific authors and wrote over a hundred books, which have been translated into twelve languages. In later life he lived in Queen Charlton, a small farming village near , contributing to the maintenance and conservation of the local area as the vice-president of the Avon Wildlife Trust. He married his first wife, Myrle, in 1943. They had 3 children and 14 grandchildren. Myrle died in 2000, and King-Smith subsequently married Zona Bedding, a family friend.
He had many pets including rats, mice, ornamental pheasants, dachshunds, geese and guinea fowl, and bred guinea pigs and English rabbits.
He presented a feature on animals on TV-AM's children's programme Rub a Dub Dub.
King-Smith died on 4 January 2011 at the age of 88. You can find out more about Dick King-Smith and his books by visiting the the Dick King-Smith page on the Puffin Books website.
Posted by Marya Jansen-Gruber at 11:48 AM