Ways of seeing - With a review of A Stone Sat Still

Generally speaking we humans are always in a hurry, and we are so used to being a hurry that we don't really know how to live when we are not in a hurry. I used to be a just such a person, until ill-health forced me to slow down. When you aren't always pushing yourself to get to what comes next, you start to notice what is here, right now, and in front of your face. You see a weed pushing its way through a concrete pavement, a bird's nest resting in a rose bush, the way the light touches the floor in a room, the beauty in a acorn that is resting on a bed of vivid, green moss.
In today's book we read about a stone. It is just a normal stone, and yet it is an extraordinary object that serves many purposes, is seen through many eyes, and 'interacts' with a wide variety of living things. It turns out that stone can be a miraculous thing if you look at it the right way.
A Stone Sat Still 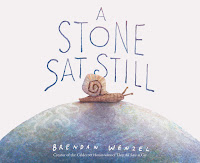 Brendan Wenzel
Picture Book
For ages 5 and up
Chronicle Books, 2019, 978-1-4521-7318-4
Next to a stream there was a stone. It sat on a little hill of earth, and green things grew around it. It was just a stone being a stone. And yet, this stone was not just a stone for the creatures that lived on it and around it.
Through the eyes of an owl it shone white in the moonlight like a beacon. For a chipmunk it was a place of darkness, and so the little animal kept watch as it nibbled a nut. After all, you never knew what might be hiding in such a puddle of dark.
For a seagull the stone was a place of loud noises, for it used the stone’s surface to crack open shells.  For a little snake the stone is a place of quiet where it can lie and bask in the warmth of the sun.
As the seasons unfolded the stone changed color; it was green in summer, covered in red leaves in fall, it was purple in spring, and blue in winter. To a moose it was a mere pebble, but to a tiny insect it was a hill.
For some animals the stone was a place that was covered with scented messages that they could read if they wished. For others it was a place to sit and dine. For geese in the sky it was a marker, and for a little ant it was a map.
From moment to moment the stone took on a different role depending on who was looking at it, or interacting with it.
Often, when we see an object we see it as one thing - one obvious thing. Surely a stone is just a stone? It turns out that a stone can be many things to many different kinds of living creatures, and its role will change over time because nothing stays the same.
As they explore this book, readers of all ages will find themselves pausing every so often to consider. They will realize that a simple stone is not so simple after all. They will perhaps take the time to consider the story of other ‘simple’ things that they see around them. What kind of story might a leaf tell? Or a blade of grass?

Posted by Marya Jansen-Gruber at 10:46 AM