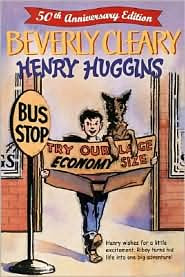 I grew up on the island of Cyprus in the Mediterranean, and though I was lucky enough to get my hands on a selection of children's books that were published in the United States, some American titles never got to my part of the world at all. These included the books by Beverly Cleary, the author who created the characters Ramona Quimby and Henry Huggins, among others. I ended up reading these books when I was an adult, and I have to say that I have enjoyed every single one of them.

Almost three years ago I moved to Oregon, the state where Beverly Cleary was born, and where so many of her stories are based. People here are incredibly proud of Beverly Cleary, and if you go to Portland you can even visit The Beverly Cleary Sculpture Garden in Grant Park where you can see the statues of Ramona Quimby, Henry Huggins, and Ribsy - some of the characters that Clearly brought to life in her books.

Beverly Cleary was born in McMinnville, Yamhill County, Oregon. She was raised on a farm in McMinnville, and grew up in Yamhill, with no local access to a library. ’s mother felt that this was a disadvantage for the students at the small farm school, and she made arrangements to have books sent there from the State Library. As a result, grew to love books.

When was six years old, her family left the farm and moved to Portland, Oregon, where she attended elementary and high school. Her struggle with reading in this new school setting was blamed partly on her dissatisfaction with the books she was required to read and partly on an unpleasant first grade teacher, Mrs. Falb. Also, after six years of living in the country, on a farm, the city life in took a toll on 's health, and in her first-grade year she was frequently ill, which set back her schoolwork and reading skills even further. 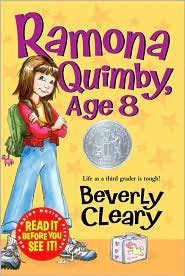 In the second grade, studied under her favorite and most-beloved teacher, Miss Marius, and by the third grade, she had greatly improved her reading ability and found a new enjoyment from books. She read The Dutch Twins by Lucy Fitch Perkins, and became a frequent visitor to the library.
The grammar school librarian was largely responsible for developing 's love of reading. She encouraged to check out books about subjects to which she could relate. The librarian not only encouraged to read but also to write her own books, and instilled in the belief that she too could write for children some day.
In 1934, age 18, she moved to Ontario, California, to attend Chaffey College, from which she earned an Associate of Arts degree. She worked as a substitute librarian at the Ontario City Library. After graduating with a BA in English in 1938 from the University of California at Berkeley, she studied at the School of Librarianship at the University of Washington in Seattle, Washington, where she earned a degree in library science in 1939.
As college was expensive, and it was the Depression, had to work to earn money, through the cooperative education program at the University. One afternoon as took a break from her chores at work she found herself having a sandwich with a young gentleman named Clarence Cleary, her future husband.
The Library Science degree allowed her to work with young children and develop a relationship with children at all socioeconomic levels. Her first full-time job as a librarian was in Yakima, Washington, where she met many children who were searching for the same books that she had always hoped to find as a child herself. sympathized with children who felt that there were no books written about children like themselves. This made more driven to help provide children with stories to which they could relate.
In response to this experience, she later wrote her first book, Henry Huggins, which was published in 1951. It was about a boy, his dog and their friends, all of whom lived on "" in (a real street that was only a few blocks from where Cleary grew up as a child). According to , Henry Huggins and his friends represented all the children she grew up with, and the ones who sat in front of her during library story hours.
As she crafted her first novel, she recalled advice from her mother and incorporated her beliefs that the best writing was simple and filled with humor. She also remembered advice from a college professor who emphasized writing about universal human experience. Beezus and Ramona, Cleary's first novel to feature the Quimby sisters as the central focus of the story, was published in 1955, although Beezus and Ramona made frequent appearances in the Henry Huggins series as supporting characters.
The opportunity to work with children as a librarian opened new doors for Beverly Cleary. She wanted to write books for children but was unsure if she had the experiences needed to write what she wanted. A publisher wanted her to write a book about a kindergarten student; Cleary felt that she could not write about this as she had not attended kindergarten. She later changed her mind after the birth of her twins. She learned to add a little wit and charm to her writing for children, with the hope that this would spark an interest in reading among her students and encourage them to want to read more books of this type. She is now an international favorite among children’s authors.
In 1940 she married Clarence T. Cleary and they moved to Oakland, California. They eloped because Cleary's parents were Presbyterians and did not approve of the union even after it occurred because Clarence was Roman Catholic. Beverly and Clarence Cleary had twins, Marrienne Elizabeth and Malcolm James. Clarence Cleary died in 2004. Beverly Cleary currently lives in Carmel, California.
She has also written two autobiographies, A Girl from Yamhill and My Own Two Feet.
Her books are available in 15 languages in over 20 countries. 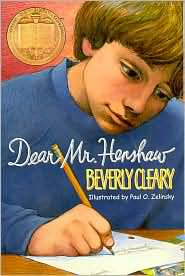 Cleary has won many awards, including the Laura Ingalls Wilder Award in 1975 and the 1984 Newbery Medal for her book Dear Mr. Henshaw. Cleary received the Library of Congress Living Legends award in the Writers and Artists category in April 2000 for her significant contributions to the cultural heritage of the . In 1980, Cleary was awarded the Regina Medal from the Catholic Library Association. She received the National Medal of Arts in 2003.
The branch of the Multnomah County Library, near where she lived as a child, commissioned a map that is on its lobby wall of Henry Huggins's Klickitat Street neighborhood. Statues of her beloved characters Henry Huggins; the Huggins's dog, Ribsy; and Ramona Quimby can be found in Grant Park in Portland, Oregon. In June 2008, the two-campus K–8 school of the same neighborhood, Hollyrood-Fernwood, itself the product of a merger of two schools the previous year, was officially renamed Beverly Cleary School. As a child, Cleary attended the former , one of the two buildings that make up the school that now bear her namesake.
In 2004, the of 's completed fundraising for the Beverly Cleary Endowed Chair for Children and Youth Services to honor her work and commitment to librarianship. In 2008, the school announced that she had been selected as the next recipient of the Universities Alumnus Summa Laude Dignata Award, the highest honor that the can bestow on a graduate.
She also has a residential hall at the University of California, Berkeley, named after her.
Cleary’s books have been published in 15 different languages and have earned many awards. A few examples of awards she has won include a 1984 Newbery Medal for Dear Mr. Henshaw; a 1978 Newbery Honor Book for Ramona and Her Father; a 1982 Newbery Honor Book for Ramona Quimby, Age 8; a 1975 Laura Ingalls Wilder Award from the Association for Library Services to Children of the American Library Association; the Catholic Library Association's 1980 Regina Medal; and the Children's Book Council's 1985 Every Child Award. Cleary’s books have been read on PBS and ABC-TV.


Do visit Beverly Cleary's website to find out more about her life and her books.
Posted by Marya Jansen-Gruber at 5:46 AM

When looking for an MBA essay editing service, make sure that you look at a few things. First of all, it can cost a pretty penny, so it's important to shop around before you settle on anything.this website