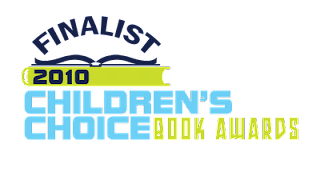 I just want to remind those of you who have children that voting for the Children's Choice Book Award is still open and will end on May 3rd. The complete lists of finalists can be viewed here, and you can cast your vote here. Give the children in your life the opportunity to be a part of this wonderful bookish event.

Here is a little information about the award:


The Children's Choice Book Awards initiative is the only national child-chosen book awards program. The Awards are administered by the Children's Book Council.

Voting will be open from March 15 to May 3, 2010. The winners will be announced live at the Children's Choice Book Awards gala on May 11 in New York City. The results will be online the following morning, so be sure to come see if your favorites won!

The finalists for Book of the Year in the Kindergarten to Second Grade, Third Grade to Fourth Grade, and Fifth Grade to Sixth Grade categories are the books that received the highest number of votes in the IRA-CBC Children’s Choices program. This joint project of the International Reading Association (IRA) and the CBC began in 1975. Publishers submit hundreds of titles, all published in the previous calendar year, to be evaluated and voted on by 12,500 children.

The Author and Illustrator of the Year finalists are selected by the CBC from a review of bestseller lists. Only authors and illustrators associated with books published in the previous calendar year are considered.

Posted by Marya Jansen-Gruber at 6:10 PM