On this day in 1904 Theodor Seuss Geisel came into the world. In honor of his birthday I would like to share a profile of this great man with you: 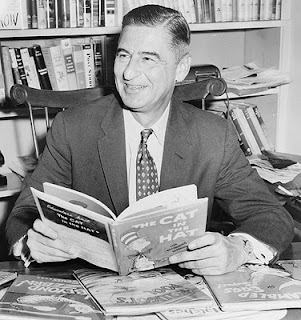 Theodor Seuss Geisel, better known to the world as the beloved Dr. Seuss, was born in 1904 on Howard Street in Springfield, Massachusetts. Ted's father, Theodor Robert, and grandfather were brewmasters in the city. His mother, Henrietta Seuss Geisel, often soothed her children to sleep by "chanting" rhymes remembered from her youth. Ted credited his mother with both his ability and desire to create the rhymes for which he became so well known.

Although the Geisels enjoyed great financial success for many years, the onset of World War I and Prohibition presented both financial and social challenges for the German immigrants. Nonetheless, the family persevered and again prospered, providing Ted and his sister, Marnie, with happy childhoods.

The influence of Ted's memories of Springfield can be seen throughout his work. Drawings of Horton the Elephant meandering along streams in the Jungle of Nool, for example, mirror the watercourses in Springfield's Forest Park from the period. The fanciful truck driven by Sylvester McMonkey McBean in The Sneetches could well be the Knox tractor that young Ted saw on the streets of Springfield. In addition to its name, Ted's first children's book, And To Think That I Saw It On Mulberry Street, is filled with Springfield imagery, including a look-alike of Mayor Fordis Parker on the reviewing stand, and police officers riding red motorcycles, the traditional color of Springfield's famed Indian Motocycles.

Ted left Springfield as a teenager to attend Dartmouth College, where he became editor-in-chief of the Jack-O-Lantern, Dartmouth's humor magazine. Although his tenure as editor ended prematurely when Ted and his friends were caught throwing a drinking party, which was against the prohibition laws and school policy, he continued to contribute to the magazine, signing his work "Seuss." This is the first record of the "Seuss" pseudonym, which was both Ted's middle name and his mother's maiden name.

To please his father, who wanted him to be a college professor, Ted went on to Oxford University in England after graduation. However, his academic studies bored him, and he decided to tour Europe instead. Oxford did provide him the opportunity to meet a classmate, Helen Palmer, who not only became his first wife, but also a children's author and book editor.

After returning to the United States, Ted began to pursue a career as a cartoonist. The Saturday Evening Post and other publications published some of his early pieces, but the bulk of Ted's activity during his early career was devoted to creating advertising campaigns for Standard Oil, which he did for more than 15 years.

As World War II approached, Ted's focus shifted, and he began contributing weekly political cartoons to PM magazine, a liberal publication. Too old for the draft, but wanting to contribute to the war effort, Ted served with Frank Capra's Signal Corps (U.S. Army) making training movies. It was here that he was introduced to the art of animation and developed a series of animated training films featuring a trainee called Private Snafu.

While Ted was continuing to contribute to Life, Vanity Fair, Judge and other magazines, Viking Press offered him a contract to illustrate a collection of children's sayings called Boners. Although the book was not a commercial success, the illustrations received great reviews, providing Ted with his first "big break" into children's literature. Getting the first book that he both wrote and illustrated, And to Think That I Saw It on Mulberry Street, published, however, required a great degree of persistence - it was rejected 27 times before being published by Vanguard Press.

After Ted's first wife died in 1967, Ted married an old friend, Audrey Stone Geisel, who not only influenced his later books, but now guards his legacy as the president of Dr. Seuss Enterprises.

At the time of his death on September 24, 1991, Ted had written and illustrated 44 children's books, including such all-time favorites as Green Eggs and Ham, Oh, the Places You'll Go, Fox in Socks, and How the Grinch Stole Christmas. His books had been translated into more than 15 languages. Over 200 million copies had found their way into homes and hearts around the world.

Besides the books, his works have provided the source for eleven children's television specials, a Broadway musical and a feature-length motion picture. Other major motion pictures are on the way.

Please visit the Seussville website to learn more about Dr. Seuss, to explore his books, to play games, and to download Seuss-ish goodies.
In honor of Dr. Seuss, March 2nd is Read Across America Day. Get information about this event on NEA's Read Across America webpage.
Please visit the TTLG Dr. Seuss page to find reviews of books by and about Dr. Seuss.
Posted by Marya Jansen-Gruber at 7:40 AM