The TTLG 2011 Picture Book Celebration: Book three hundred and one

As the mother of a tween girl, I often worry that my daughter will get caught up in what I call the "look at me" crowd. These are tweens and teens who think their appearance defines them. They spend so much of their time creating an image for themselves that they spend no time at all thinking about what they are like as people.
In today's picture book you will meet an elephant who is, like all elephants, rather odd looking. Thankfully, Willy the elephant has the good sense not to worry about how he looks. Instead, he focuses on helping the people around him, which means that he is loved and appreciated.
Willy
Geert De Kockere 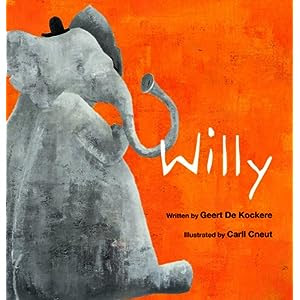 Illustrated by Carll Cneut
Picture Book
For ages 5 and up
Eerdmans, 2011, 978-0-8028-5395-0
Willy is an elephant, which means that he has four pillar-like legs, an enormous body, huge ears that flap, a trunk attached to his face, and a tail with a “ridiculous brush at the end” attached to his rear. In short, Willy is not exactly beautiful. In fact he is downright odd looking.
One would think his oddness would be a problem for Willy. But it isn’t. He is “invited everywhere.” Having such big ears, Willy is an excellent listener. He hears about happy things, and he hears about the events that made people sob and sigh. Willy’s tail serves as an excellent paintbrush, and his trunk does an admirable job beating time in the choir. Of course, some people make unkind remarks about Willy’s appearance, but Willy’s friends and admirers “brushed off,” “overruled,” or “swept away” these words.
Most of us have our own version of Willy’s big ears, his long dangly trunk, or his funny little tail. We wish we were blonder, bigger, smaller, and so many other things. Luckily Willy is here, in this book, to remind us that what we look like doesn’t matter. What matters is how we choose to help others, and how we are loved.
With a message that is ageless and timeless, and a loveable main character, this is a picture book that will resonate with readers of all ages.
Posted by Marya Jansen-Gruber at 5:33 AM