When I come home, my three dogs always give me an enthusiastic welcome, even if I have only been gone for ten minutes. My two cats have a different approach. First their feign indifference. Then then come over and give me a look as if to say "and where were you may I ask?" Only after they have made it clear that I really am not worthy of their notice will they condescend to say hello. Such is the way of cats.
Today's poetry picture book perfectly captures the quirky personalities of cats. 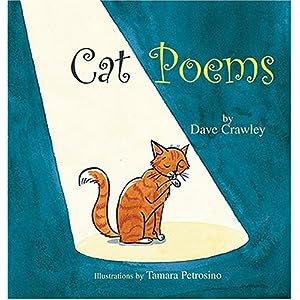 Cat Poems
Dave Crawley
Illustrated by Tamara Petrosino
Poetry Picture Book
For ages 7 to 10
Boyds Mills Press, 2005, 1-59078-287-9
Anyone who has spent a decent amount of time with a cat knows that cats are singular creatures that cannot be forced to do things that they do not want to do. If you think that you have the upper hand, you will soon discover that you have been had, and that the feline is the one who has won the battle. Don’t believe me? Well, take a look at this book, and you will see what I am talking about.
The author begins by telling us about Malabar. Malabar was a beautiful cat who was chosen to be the new spokescat for Fluffyfood, a brand of cat food. After being groomed, stroked, and combed by a team of people, Malabar was offered two cans of food. One was Fluffyfood, and one was “another brand.” While the cameras rolled and “watchers clapped,” Malabar began to eat the food. The problem was that he chose to eat the rival brand of food instead of the sample of Fluffyfood.
Then there is the story about the cat who cannot read, “To think he could would be absurd.” Though words on a page are beyond him, this cat does seem to know how to read minds. I say this, because whenever his mistress tries to read a book, the cat “stops and flops on chapter one” making it impossible for the girl to do her homework. The cat clearly knows that the girl “didn’t want to work,” and he makes it easy for her to avoid doing so.
Unlike dogs, cats are not really interested in pleasing their people. They will not do tricks, and rarely respond to efforts to train them. The truth is that cats are far too intelligent to chase sticks, to sit on command, or to come when they are called. Why should they when they know all too well that we humans will feed them and play with them no matter what they do. It would seem that cats are adept people trainers.
In this book, Dave Crawley’s delightful poems are paired with Tamara Petrosino’s illustrations to give cat lovers of all ages a special cat-centric bookish experience. Cat owners will nod as they read about the felines in his poems, recognizing attitudes and behaviors. They will laugh at the cat antics described, and will appreciate that Dave Crawley is clearly an unrepentant cat fan.
Posted by Marya Jansen-Gruber at 7:35 AM