Humans like to think that they and they alone corner the market when it comes to being able to form friendships and having the need for friends. I do not believe this is true at all. I have seen my dogs get upset when one of their number is missing, and one of my cats walking around the house crying and trying to find her friend - who is at the vet's office. Friendships develop between species too. Just look a the story about Owen and Mzee. Who would have thought that a baby hippo and an elderly giant Aldebaran tortoise could be friends, but they were.

Today's book is about a beast who finds that he is lonely and who tries to find other beasts to be his friends. 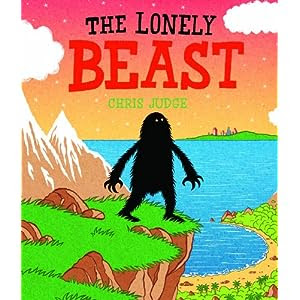 Chris Judge
Picture Book
For ages 5 to 7
Andresen Press , 2011, 978-0-7613-8097-9
There are Beasts all over the world, but since there is only one in every country, they don’t know each other. These gentle rare creatures love to tend their gardens, drink tea, read good books, walk in the snow, stand in the rain, bake cakes, and eat cakes. They live in remote places like high mountains and deep woods.
There was one of these Beasts who one day realized that he was lonely and he decided “that he would go and find some other Beasts.” He travelled a long way and endured many hardships until he came to a city. There were no Beasts there, but there were a lot of people. At first, the people were frightened of the Beast, but soon they grew to like him, and he lived in the big city park.
The Beast had plenty to do, and many human visitors, but he still felt lonely. He tried to contact other Beasts using the media, and soon everyone was talking about him. The problem was that none of the other Beasts were getting in touch.
This wonderful picture book is charming and inspirational. Readers will be moved when they see what the Beast does to try to find other Beasts like himself. They will grow fond of the gentle creature who loves to read good books and eat cake, and they will find themselves hoping that this Beast gets his wish.
Posted by Marya Jansen-Gruber at 5:33 AM