Thankfully there are now hundreds of fantastic comics/graphic novels being published that are not only beautifully drawn, but that are wonderfully written as well. These are books even my book snob of a father would have approved of!
For today's review I have the first title in a series of graphic novels that are about three very different individuals who share adventures. Though they don't always agree on things, when it matters, they help each other out. 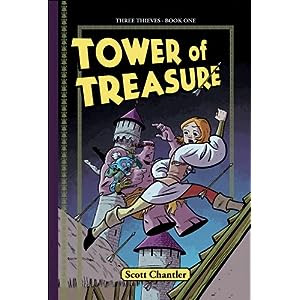 Scott Chantler
Graphic Novel
For ages 9 to 12
Kids Can Press, 2010, 978-1-55453-414-2
When Dessa was just a little girl, a tall man with a dark beard came and visited the home that she shared with her mother and twin brother. Dessa and her twin were hiding under the floor, but when the man threatened their mother, Dessa’s brother told her to run and that he would “take care of it.” To this day Dessa has no idea what happened to her brother, but she does know that her mother died when their home was set on fire that night.
Now Dessa is part of a travelling circus. She performs as an acrobat, and she is very good at what she does, but her life is hard and she does not particularly enjoy being browbeaten by her boss, Hugo.
When the circus gets to Kingsbridge, Hugo is hopeful that they will make lots of money in the big town. While she is performing, Dessa sees someone who looks like the tall man with the beard who destroyed her family. Unable to contain her fury, Dessa accosts the man, only to find out that she has made a mistake.
Hugo is furious with Dessa and her friends Fisk and Topper for wrecking the show, and he demands that they either find money or food. He never imagines that Topper is going to try to rob the Queen’s treasury, or that Dessa is actually going to meet the man who killed her mother and kidnapped her brother.
This is the first book in what promises to be a thrilling graphic novel series. The tale is packed with colorful characters, and there are plenty of action scenes throughout the story. In addition, we are given clues in this first book about who Dessa’s enemy is, and we can look forward to following Dessa’s adventures as she pursues this enemy and tries to find her brother.
Posted by Marya Jansen-Gruber at 5:51 AM