Poetry Friday - A review of A Kick in the head: An everyday Guide to Poetic Forms

When I was a child, I thought that poetry came in two forms: poems that rhyme, and those that don't. I never knew that there are lots of poetic forms, and I certainly did not explore these forms. Today's poetry book would have delighted me because it shows, with examples, that poems come in a wide variety of flavors, just like ice-cream!
A Kick in the Head: An Everyday Guide to Poetic Forms 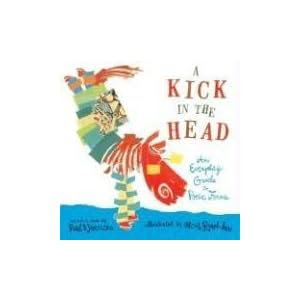 Paul B. Janeczko
Illustrated by Chris Raschka
Poetry Picture Book
For ages 8 to 12
Candlewick, 2005, 978-0763606626
Have you even wondered what makes a haiku a haiku, or what a riddle poem is? Have you ever wondered why poets let themselves be governed by rules at all, and when they decide to break the rules for the sake of their art? If you the kind of person who has asked these kinds of questions, then this is the book for you. With delightful touches of humor and an obvious love of poetry, Paul Janeczko explores twenty-nine poetic forms. For each one, he gives the reader an example poem or two, and a brief description of the form. More detailed descriptions for each form can be found in the back of the book.
Some of the poems may be familiar, including “The Tyger” by William Blake, a selection from “The shooting of Dan McGrew,” and “Ode to Pablo’s Tennis Shoes” by Soto. Some of the other poems may be new to the reader, and they will offer the reader the opportunity to see that the world of poetry is full of variety and creativity. Many of the poems that were chosen for this volume are amusing, and a few are also very visual.
For each poem, Chris Raschka has created a unique multimedia illustration, which not only compliments the poem, but which also often reflects on the poetry form that was used to create that poem.
Posted by Marya Jansen-Gruber at 5:24 AM