So many of the world's problems seem to arise because people are suspicious of other people who are not like them. They are taught or conditioned to distrust people who look different, who speak a different language, or who come from a different country.

In this picture book, the authors address this issue with humor and sensitivity. Children will see that being different is not a bad thing, and that the first step to understanding others is to be open minded and non-judgmental. 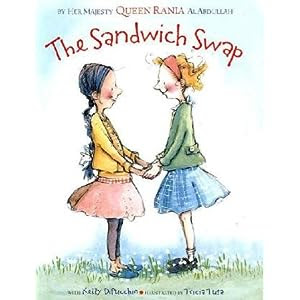 The sandwich swap
Her Majesty Queen Rania Al Abdullah and Kelly DiPucchio
Illustrated by Tricia Tusa
Picture Book
For ages 5 to 8
Hyperion, 2010, 978-142312484-9
Lily and Salma are the best of friends. At school, they draw together, play together, and eat lunch together. The girls are so much alike, except that they eat very different foods for lunch. Salma has a hummus and pita sandwich, and Lily has a peanut butter and jelly sandwich. Salma thinks Lily’s lunch looks “strange and gross,” and Lily thinks Salma’s lunch looks “weird and yucky,” but both girls keep their feelings to themselves.
Then one day Lily can no longer keep her opinion to herself, and she tells Salma what that she thinks Salma’s food looks “yucky.” Not surprisingly, Salma’s feelings are hurt and she gets angry, and she responds by saying that Lily’s food “looks gross, and it smells bad too!”
That afternoon the girls avoid one another, and the next day they don’t have lunch together. Worse still, some of the kids in school are supporting Lily, while others are supporting Salma, and a state of war reigns in the lunchroom. Then, to Lily and Salma’s horror, a food fight breaks out. How did their silly disagreement create such an unfortunate situation?
It is all too easy to negatively judge people who are different simply because they are different. With their wonderful story, Queen Rania Al Abdullah of Jordan and Kelly DiPucchio explore the idea that the first step towards tolerance and understanding is to have an open mind and to be willing try new things. All too often, people decide that something is “yucky” without even trying it. They decide that a person is “weird” because they look and sound different.
One hopes that many children and their families will read this picture book, and take in the important message it contains.
Posted by Marya Jansen-Gruber at 5:35 AM