Saying no comes naturally to little children. In fact, many of them take great pride in saying "NO!" as often as possible. When they are older, children try to get away with saying no to adults, usually with limited success, but saying no to their peers can be a problem. There are times when they need to say no to a classmate or a friend, but the word simply won't come out. What if they hurt their friend's feelings? What if the classmate gets angry?

In today's picture book, you will meet a little girl who cannot say no to her friend, even when she wants to, and it is a very frustrating situation. 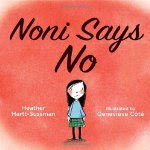 Noni says No
Heather Hartt-Sussman
Illustrated by Genevieve Cote
Picture Book
For ages 5 to 7
Tundra, 2011, 978-1-77049-233-2
When Noni was a baby, and then a toddler, she had no problem saying no. In fact, she made a point of saying no as often as she could. Now that she is older, Noni can do all kinds of wonderful and marvelous things like tie her own shoes, feed her baby brother, and say the alphabet backwards. The one thing that Noni cannot do, is to say no. Even when she wants to say no, Noni ends up saying yes instead.
Noni’s friend Susie has no problem saying no when she wants to. She says no when Noni asks to sleep over, and when Noni wants to play with Susie’s teddy bear. Poor Noni is never able to say no to Susie, even when Susie asks to cut off all of Noni’s hair “except for a tuft at the front.” Poor Noni always finds herself saying yes.
Some people have a terrible time finding the courage to stand up for themselves. They don’t want to rock the boat or upset anyone, so they don’t speak their mind. All too often, this means that they end up doing things that they don’t want to do.
In this book, Heather Hartt-Sussman speaks up for all those people who cannot say no, but who long for the courage to do so. Though this title is for younger children, its message is universal, and it will resonate with readers of all ages.
Posted by Marya Jansen-Gruber at 5:57 AM